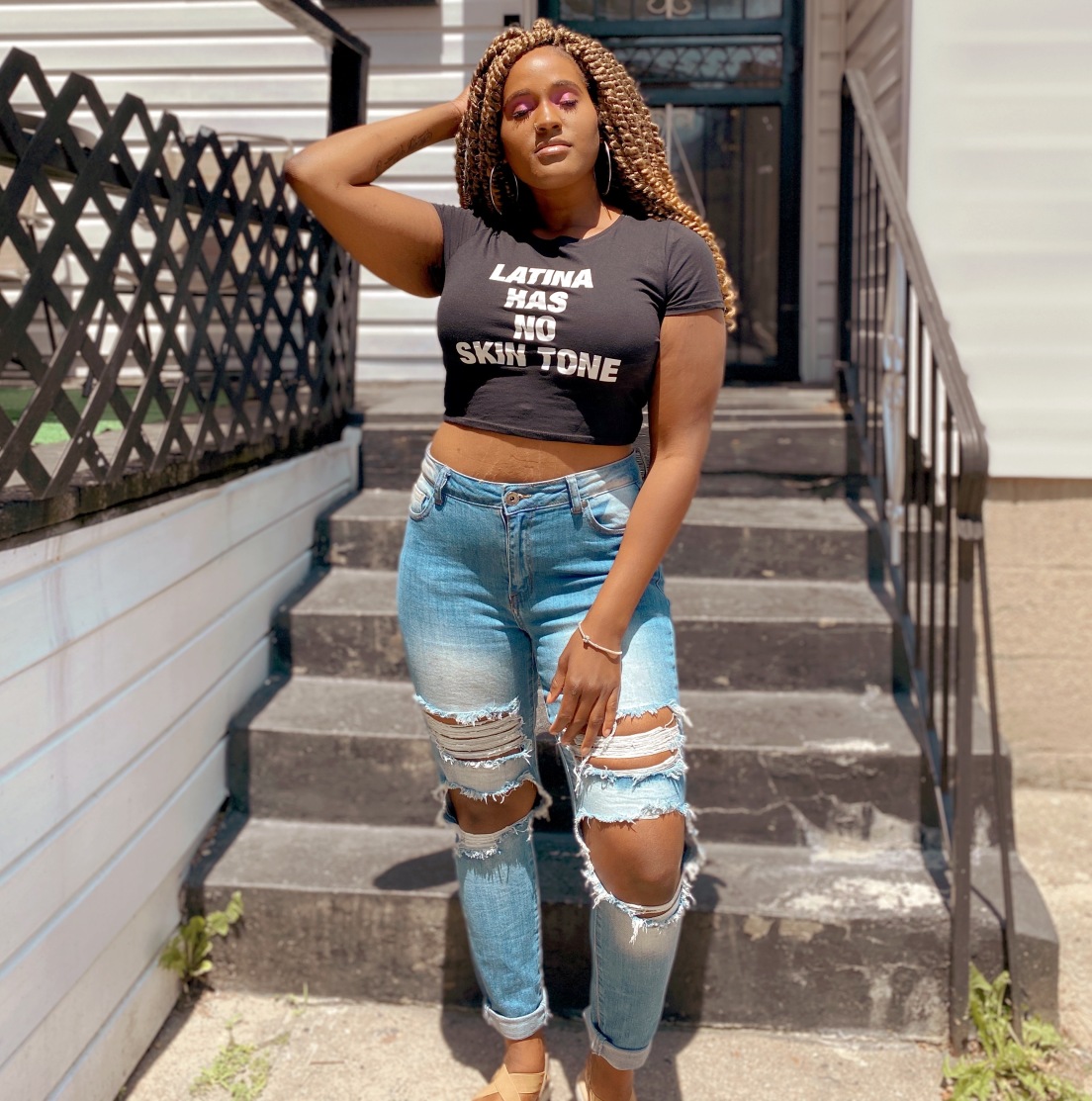 Jahena Louisin reached out to interview me about my heritage and my identity. I was honored and excited we shared the same aspiration of sharing narratives of African descendants. Born in France and being of Haitian and Reunion Island descent her goal is to build bridges between the African diasporas and the continent, but also between diasporas themselves.  She realized that there is a major gap and lack of information. Jahena will be launching her platform called Diasporically soon and sharing this interview in French, English, Portuguese and Spanish. It is truly an honor to have been interviewed by such an intellectual individual and having the ability to share it on my platform.

I hope this will help you learn more about me as the creator! Enjoy!

Jahëna Louisin : Talk to us about your personal experience: growing as an Afro-Latina, what does it mean? Where did you grow up?

Jenay Wright: My journey as a proud Afro-Latina has been a beautiful experience. I always knew I was a Black woman and I always embraced my blackness. I grew up closer to my mother’s family who is of Panamanian descent. My Abuela is who taught me everything I knew about my Panamanian culture. From the traditions of her food, music, and language.

I was raised in the Bronx, New York where not that many Panamanians resided compared to Brooklyn.

Many people didn’t understand my experience.  I was a Black woman whose roots traced back to Latin America but even further to Africa. It was almost something unknown or out of the usual for some that there were Black Latinas.

So to really answer that question, prior to identifying as Afro-Latina it was a sort of challenge. When people saw this 4c, brown-skinned haired girl who didn’t speak any Spanish they denied me of my culture. Literally, I felt snatched of my pride.

Instead of being asked about who I am and where I came from I was called Spanish racial slurs and bullied for the way I looked. I don’t play the victim but I can say I survived those challenges and years later I am an Afro-Latina activist. It didn’t matter who understood or who wanted to erase who I was.  I was going to make sure I taught and raised awareness about Afro –Latinos.

To be an Afro-Latina is to a Black descendant from Latin America. I believe it can also be one who has one parent of African / Black descent and has a Latin American parent. It is all about being proud of your blackness.

JL: How would you define yourself? When and how did you get aware of your skin color?

JW: I define myself as a proud Afro- American, and Afro-Latina. I say this because my mom is an Afro –Panamanian and my father was as Black American.  Both sides of my family have instilled strong roots that I will carry on with me and my children in the future.

My mother and father both had brown skin that looked just like me. I used to watch the Bill Cosby show and watch Raven Symone and seen her skin matched mines and other shows I grew up on and knew I was a beautiful black girl.

We were often taught to hate our skin and I am not going to lie sometimes I questioned my beauty and if I was seen as attractive because of my skin. Hence, I had a strong black mother who reminded me every day.

JL: How are Afro – Latinas portrayed in the media? And what is their place in society? Why are we not hearing a lot about them?

Afro-Latinas in US media often always play African American based roles because there wasn’t a space created for Afro-Latinas. We see this with Christina Milian as well as Zoe Saldana, even though they were lighter skin Afro-Latinas they still were pushed away from playing any Latina roles. Both actresses are fluent in Spanish so why were they pushed away. They didn’t look like Sofia Vergara or Shakira. Even though they are Black women they played Black American roles instead of Black Latina roles. If this space was provided, many young Black Latinx children could relate and see themselves in the media.

Representation plays a huge role in not only our identity but in actuality. What we see is sometimes what we believe? If there isn’t a space for us in film, radio or television, do we even really exist here?

Afro-Latinas in Latin American media are barely shown and if we are we are slaves, maids or criminals. We are portrayed in the slums and if we get a chance to live somewhere better it’s in a White Latinx mansion serving them. They aren’t completely saying it out loud but it speaks the slavery mindset still to this day. There is a long way to go with our people being in novelas. We sometimes don’t even see indigenous Latinos in the film either. It’s completely whitewashed and it’s sad. There is a touch of Africa in every part of Latin America and its time we stop hiding and trying to erase something that exists.

The worst part is that Blackface exists especially in Latin America. It truly sickens me

They’re Black people in media to play darker skin roles. However, they rather take a white Latinx and paint their face black to portray us. That is ridiculous.

JL: When you talked about the representation of Afro Latinxs in the media in South America. How can we break the cycle? Where can we start?

JW: I believe the best way to break the cycle is for Afro-Latinx to create their own spaces and use their platforms to do so.

Martin Luther King led a nonviolent protest for our rights.

Rosa Parks sat on the bus and boycotted transportation for some of us to even be able to sit in the front. The purpose of this is to show how vital it is to get your point across, sometimes you have to be proactive and take initiative.

We can’t always wait around waiting for society to change its sentiments and perceptions. This is the exact reason for the existence of my blog because there was no place to tell my story. I could have waited for almost 3 years or I could have started my own and tell it. This is the only way to break the cycle, create our own save spaces.

This means even in Latin America, we have to come together and unify.

I want to see my face in Telemundo and Univision. Don’t you?

JL: Is Afro-Latinos aware of their African heritage? Are there initiatives to build bridges between the two?

JW: Afro-Latino is just short for African Latinos. This is apart accepting our African roots and reclaiming our culture and traditions. There is some that don’t really understand what it really means to identify with Afro-Latinos. Some do it out of convenience or to be a part of a trend. Afro-Latinos are not exotic and sometimes I don’t know what people really think we are supposed to look like. There isn’t just one face to the term; we come in many different shapes, sizes, and colors. I believe the term itself is building bridges between the two. There should be no separation. Blacks hail all over the world whether it’s the Caribbean, United Kingdom, Latin America or parts of Africa. We are one!

JL: Now let’s talk about “HashtagIAmEnough”: why this name? When did you create this platform and what do you originally want to show/share? Why it was important to you?

JW: This was the first interview out of many that asked me about the title #IAmEnough.

I ran through so many names and couldn’t pick one that resonated with me.

I thought about the actual # and how much power it holds in media. Hashtags are a powerful tool in this time and I wanted my blog name to be bold and represent something more. I incorporated I Am Enough because I felt like it is something that everyone should be able to say proudly. There are so many young people lacking self –love, and confidence. I was a part of that group but saying #IAmEnough every single day reminds me that I am more than enough and I deserve to be here.

I created this platform in September 2015 in my senior year of college. In the beginning, it was for a blogging course and who knew years later it will keep growing into where it is now. My professor Teresa Puente had her own website dedicated to Latinas and telling their stories it was called Latina Voices.  I use to help edit and write for the site which truly inspired me.I wanted to do the same for Afro-Latinas and share their narratives so people knew who we are. This blog was prevalent because there weren’t many places to share my story and my content. So it was vital I create a platform for other people.

JL: Have you realized things along the way? What was the feedback that you had from other Afro Latinas?

JW: I’ve learned that I am doing this because it’s what I love. I don’t receive any money or revenue from my blog. It’s something I wanted to manifest to the world and raise awareness about an unrepresented community of people. I have received so much positive and love from my readers. They send me the sweetest direct messages and it has inspired some others to create their own blog or projects. I call them my #IAmEnough fam because if it wasn’t for my guest bloggers, readers and interviewees I am not sure where my blog will be. I hope to have inspired a few and keep the legacy going.